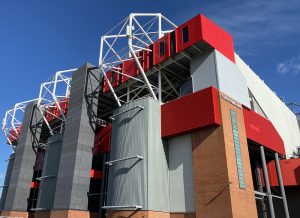 Manchester United FC have built a new accessible viewing concourse at the top of the West Stand. This is part of an £11m spend to provide 118 new wheelchair position and 158 new amenity seats across the stadium. 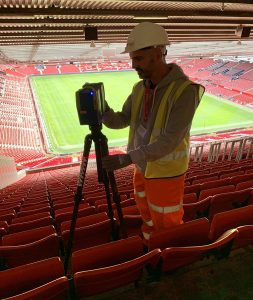 We undertook a 3D laser scanning survey of the iconic Stretford End at Manchester United’s stadium, Old Trafford. This was to assess the geometry of existing steelwork, in order to fully coordinate against the proposed design. The advantages of utilising the 3D laser scanning method for this task were three-fold: speed, accuracy and cost.

Oakwood’s laser scanning team were on-site for less than two days, in which time we captured all external elements of the terracing, roof and ground floor.

The 3d model of the existing steel subsequently created from the point cloud survey was proved to be accurate to within +-2mm. This allowed the team to use the point cloud to measure details such as bolt sizes and even welds!

The proposed design could be coordinated, fabricated and erected using fully accurate information. This assured programme certainty and avoided costly conflicts and delays.

Digital interrogation of the existing structure

The project was then passed from the 3D laser scanning team to the steelwork detailing team at Oakwood. We built a 3D Revit model of the existing steel from the point cloud, which was subsequently transferred to Tekla Structures via IFC. Our team built the accurate fabrication model of the proposed structure, whilst clash checking against the existing state IFC.

Many conflicts were identified, but these were resolved prior to fabrication and hence saved valuable time and cost. Our client was then able to erect the steelwork with a high degree of confidence. 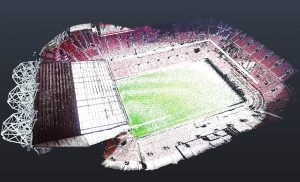 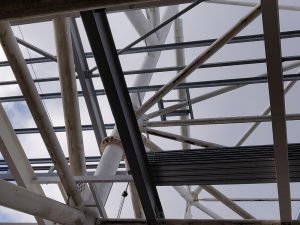 The platform and concourse were completed in early September 2021.